Our group of fifty is mostly gathered at the hostel in Vienna ahead of our actual start tomorrow (Friday) morning, so the bike lockup has gone from being busy to being pretty much solid bikes. My own is in the near row in the centre, not that you can tell in the crowd!

What’s actually interesting is how many bike tourists are staying here who aren’t part of our giant group. There are even posters up in the hostel about the bike routes along the Danube and elsewhere in Austria and the other hostels along those trails.

Or, jetlag-induced ramblings and notes, in lieu of an actual post…

Toronto Pearson airport was surprisingly empty, parts of it creepily so in the stretches between gates. The international departures area is the land of 10,000 iPads, one per seat for dozens of tables. Power and USB charging at every table too, which is nice.

Frankfurt airport is a giant, sprawling, chaotic monster. I’m still not sure how I got from my arrival gate to my departure, but I made it… Good coffee there, anyway.

Vienna airport is surprisingly elegant and well organized, although the signposting of the bike route unto Vienna proper leaves something to be desired.

Biking in Vienna is fun, taxis and pedestrians actually respect bike lanes, and theres a lot of bike infrastructure from a North American perspective. More on that in a future post, actually…

Anyway, I found my way to the hostel we’re all booked at, which is a classic German-style Official HI hostel: very well run, huge, scrupulously clean, and otherwise pretty boring. And full of teenagers on some sort of school trip…

Tomorrow we’re biking off toward Bratislava on the EV6 to meet up with another part of our group who flew unto Budapest and are heading up toward Vienna. Hopefully we reach Slovakia, it’ll be a new country on my life list!

More soon, hopefully with less rambling as I get rid of the jetlag! 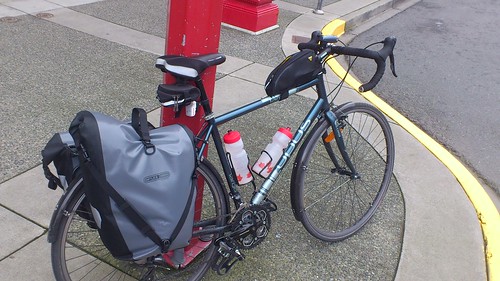 So, the trip. I first read about this trip sometime in July or August last year (2013) while surfing the web one very slow day at work. I’d just bought a new bike, was wandering through biking-related websites, and found a mention of this French group (AF3V) who were running a group ride from Vienna, Austria to Nantes, France in the summer of 2014 – details to follow…

I kept the website in mind, and they started posting a few more details in the summer and early fall and I started getting more and more into the idea of shipping myself and my bike off to Austria and riding 2000+ km across four countries over six weeks.

The nominal reason for the ride is to celebrate the fact that Nantes will host VeloCity 2015, an international cycling conference, and to link it symbolically to Vienna, which hosted the 2013 Velo-City event, as well as to raise awareness of the Eurovelo bike routes generally. For me, though, it’s primarily a chance to get back to Europe – I haven’t been there since 2007, when I was enroute to South Africa, and prior to that two backpacking trips in 1997 & 2000 – and do a really epic bike ride!

The AF3V page on the Randonnée Vienne-Nantes has a short one-page list of stages downloadable in PDF form, as well as the much more detailed 100 page long “route book” recently uploaded in PDF which has more detail about where we’re staying on the ride and such.

I’ve also created four Google Maps setups, both so I could study the route before I went and also to share the route with friends and relatives easily.

Map One is Vienna, Austria to Passau, Germany, up the Danube from Austria’s capital into north-east Bavaria.

Map Two is Passau, Germany to Überlingen, Germany, across Bavaria in a wide arc north of Munich following the Danube nearly until it’s end, then heading south to the Bodensee (Lake Constance) on the German-Swiss border.

Map Three is Überlingen, Germany to Digion, France, into Switzerland along the Rhine, then into France until we meet the Loire River at Digion.

Map Four is Digion, France to Nantes, France, entirely along the Loire almost to the Atlantic Ocean.

The whole route is somewhere in the neighbourhood of 2200km. The towns (each white dot) are right on each map, but the exact routes might well not be. Still enough to follow along, mostly, and for me to explore virtually in the next two weeks before I go!